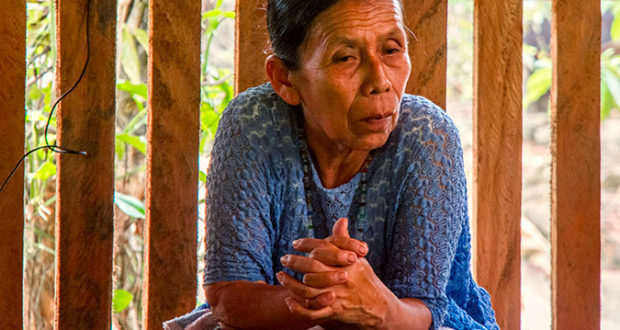 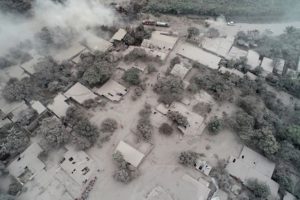 Ten days ago when Guatemala’s Fuego volcano erupted on June 3, villages, coffee farms and a golf resort downslope were consumed in just minutes by a pyroclastic flow — a fast-moving mixture of hot gas and volcanic rock that happens when an eruption releases mixtures that are denser than air, it forms a toxic landslide, careering downhill at speeds of between 30 and 90 miles per hour and temperatures up to 1,300 degrees.

Just 50 km from the Guatemalan capital, the Volcán de Fuego – or Volcano of Fire – erupted Sunday afternoon at 3 PM local time with pillars of fire extending 10,000 meters above sea level. Streams of lava, hot gas and volcanic matter destroyed houses and crops, killing and injuring scores of people. Over 10,000 have been evacuated and 1.7 million people are affected.

This devastating eruption of the Fuego Volcano has to date  left 110 dead and hundreds missing. Thousands of families have been forced to flee their homes to avoid the pyroclastic fallout. Although shelters have been established, many are run entirely by volunteers and have no established feeding operation.

In a search for current updates on the situation of the people there  I came across this piece online that reminded me very much of what Nano Nagle  did, acting on her feet, with others to immediately do something practical to alleviate the suffering she lived amidst.  Nano Nagle recognised that in ministering to people it was often necessary to make provision for care of the body as well as the mind and spirit/soul. She understood the connection between all aspects of the human person.

Just 4 days after  arriving in Guatemala following this devastating event,   Chef José Andrés  with a team of 12 volunteers  have been preparing a total of 6,000 meals a day to feed those who have been affected by the volcano eruption.  Andrés is most popular for his small delicate tapas, but throughout the years, these small plates have turned into big missions.  He founded the nonprofit World Central Kitchen after the devastating earthquake in Haiti in 2010. The mission was simple, to make food an agent of change.

In Guatemala in these days, with the help of local government, private sectors, and other non- governmental organisations, Andrés has planned an effective feeding programme to deliver meals to 18 distribution points. By partnering with local kitchens and food trucks, they are able to quickly and effectively produce meals and deliver them to shelters.

The logistics of working in another country is challenging, said Nate Mook, a spokesman for World Central Kitchen.

“Although Puerto Rico was hit hard, it was ultimately still in the United States and had support from the US military and other organizations,” he said. “The shelters here are far more informal and chaotic, and evacuees are quite vulnerable here.”

Due to some of the road conditions and ongoing effects of the eruption, delivering the food has been quite dangerous.

“The volcano still has potential to be very damaging without us knowing. We were in Ceilán the other day and lava began coming down but we were not aware of it because the thunderstorms [got mixed up] with volcano noise,” Andrés told CNN.

Andrés and his team plan to stay in the country for about a month.

In a message, Pope Francis assured his closeness to the wounded and to those who are “working tirelessly to help the victims” while asking the Lord to “bestow upon them all the gifts of solidarity, spiritual serenity and Christian hope”.

According to Caritas Guatemala  over 2,500 people are in temporary shelter. Twelve hostels in Escuintla and one in Sacatepéquez have been set up; 25,000 people have benefited from Trocaire’s programmes in Guatemala in the past year.

© Copyright 2022 - Presentation Sisters Union North East Ireland - All rights reserved | Website by Digital Training Institute
4 Shares
Share4
Tweet
We use cookies to ensure that we give you the best experience on our website. By your continued use of this site you accept such use.ACCEPTREAD MORE