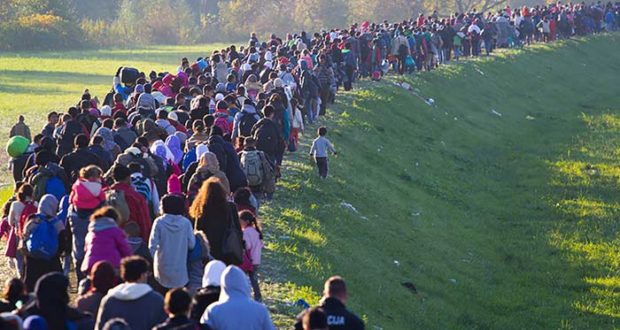 Now take a second look, and read this poem again, but this time from the bottom up.

“We have to see it in terms of the community and how we live together with our diversity. We welcome the stranger because we’re strangers ourselves. We’re strangers to one another.” – Sr. Yudith Pereira Rico, Global Sisters Report

Some information on refugee numbers

The number of refugees, asylum-seekers and internally displaced people around the world has topped 65 million, the United Nations High Commissioner for Refugees said on Monday of this week.

One in every 113 people on Earth has now been driven from their home by persecution, conflict and violence or human rights violations.  Two other ways to get your head around that number:

A refugee is someone who has been forced to flee his or her country because of persecution, war or violence.  Most likely they cannot return to their home country or are afraid to do so.  An asylum seeker is a person who has applied to a country for declaration as a refugee. There are an estimated 3.1 million asylum seekers worldwide.

There are 5,375 asylum seekers living in direct provision centres across Ireland.