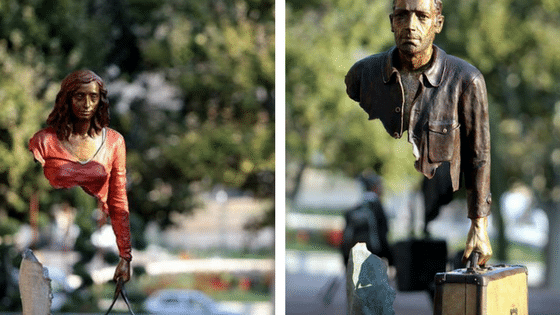 I was reminded today of these quite extraordinary sculptures that were created by the French artist Bruno Catalano, by a Facebook Post from the Chapel of Unity at Coventry Cathedral @chapelofunitycoventry.

In 2013, he created an extraordinary series of eye-catching bronze sculptures called “Les Voyageurs” in Marseilles that depicted realistic human workers with large parts of their bodies missing.

The sculptures were put on display in Marseilles to celebrate its position as the 2013 European Capital of Culture. They are skilful works of art even without the omissions. But the missing parts of the sculptures make them truly extraordinary and unique.

They leave room for the imagination – are they missing something, or is it something that these “voyagers” have simply left behind?

What’s especially impressive is that some of the sculptures seem to stand on very little support, giving them a sort of ethereal and surreal appearance.  For the artist the sculptures symbolise the vacuum created by being forced to leave your land, your life, your people… for any reason.

Catalano says “I have travelled a lot and I left Morocco when I was 12 years old. I felt that a part of me was gone and will never come back”.

Contemplating these figures against the human landscape of today – those dispossessed of land, space, home, country – these can speak to us on many levels.

The reality of Nano Nagle’s life was rooted in respect for the dignity of persons and for human rights.  As an adult, her vision was one of empowering the disenfranchised.  She would have been described today (among other things) as a social activist.  Today, those who walk in the footsteps of Nano Nagle continue that legacy.

See also the  link HERE to a previous News Post on our website on  ‘Workers on the move – the Quest for Justice’.

© Copyright 2022 - Presentation Sisters Union North East Ireland - All rights reserved | Website by Digital Training Institute
8 Shares
Share8
Tweet
We use cookies to ensure that we give you the best experience on our website. By your continued use of this site you accept such use.ACCEPTREAD MORE