Featured News
Home / Blogging With Purpose / Becoming what we love … 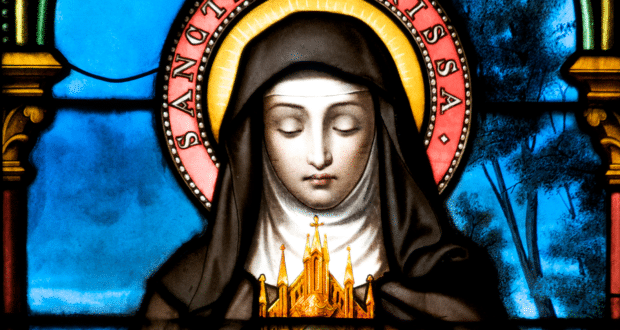 Becoming what we love …

Today, 11th August, is the Feast day of St Clare of Assisi (1194 – 1253)  who aged 18 years, heard St. Francis of Assisi preach and asked him to help her live according to the Gospel.  In time a separate dwelling was built for Clare and her sister next to the church of San Damiano. Other women joined them and a congregation was formed. Their life, modelled on the rule of St Francis, was austere – a “radical commitment to corporate poverty,” though as Clare once exclaimed:

“They say that we are too poor, but can a heart which possesses the infinite God be truly called poor?”

Born into a wealthy, noble family, Clare chose to follow the Gospel way of simplicity and poverty rather than retain her status and lifestyle of ease.  In several of her writings she speaks of her own need to be radically faithful to the Gospel:

Both St. Francis of Assisi (1182–1226) and St. Clare (1194–1253) let go of their fear of suffering; any need for power, prestige, and possessions; and any need for their small self to be important. By doing so they came to know who they really were in God—and thus who they objectively were. (Richard Rohr, OFM – Daily meditations by Daily Meditations Archives — Center for Action and Contemplation (cac.org) – 15 April, 2021)

St Clare of Assisi discovered her spiritual identity through her encounter with St. Francis.  She wrote: “ …  without that face I would have no face.  I found God through him”.  Theirs was a prophetic opening that led to medieval society discovering the person as a way to reach God.  Charisms are ‘freely given graces’, and provide the openings  through which it is possible to connect and respond to  something beautiful and great, that expresses God’s love for humanity.

Through St. Clare came the emergence of a feminine charism in the Church where St. Clare gained approval by the Holy See for her ‘Highest Poverty’.  Holy Unity and the highest poverty was the charism that unfolded through her.

Open to the new

Franciscan, Sr. Ilia Delio writes in the same mediation by Richard Rohr (15 April 2020) (see The Prayer of Francis and Clare — Center for Action and Contemplation (cac.org)

[Francis’] life indicates to us that if we persevere in prayer we will find God in the centre of our lives and the bitter will become sweet [as when Francis kissed the leper]; however, if we stay on the plain of mediocrity then the bitter may remain bitter.

To trust in the power of God’s grace through darkness, isolation, bitterness, and rejection is to be on the way to becoming prayer because it is the way to freedom in God. For prayer, that deep relationship of God breathing in us, requires change and conversion. And where there is change, there is the letting go of the old and the giving birth to the new.

To pray is to be open to the new, to the future in God. The way to life passes through change and ultimately the change from death to life. Prayer is the way to life because in prayer we are invited to change and to grow in love.  [1] Ilia Delio, Franciscan Prayer (Franciscan Media: 2004), 28.

Richard Rohr writes at the conclusion of this meditation:

“I find myself in prayer much of the time right now, not simply because of the limitations of our current circumstances, but because I want to be a witness to such divine freedom. I believe it is this kind of prayer that may keep us from simply hoping things quickly return to “normal” (though that is a comforting thought to many) and instead praying for the courage to “change and grow in love.” Such courage is surely what we and the world truly need.

“We become what we love and who we love shapes what we become. If we love things, we become a thing. If we love nothing, we become nothing. Imitation is not a literal mimicking of Christ, rather it means becoming the image of the beloved, an image disclosed through transformation. This means we are to become vessels of God’s compassionate love for others.”

Happy Feast of St. Clare to the Franciscan family and to everyone with a Franciscan spirit.