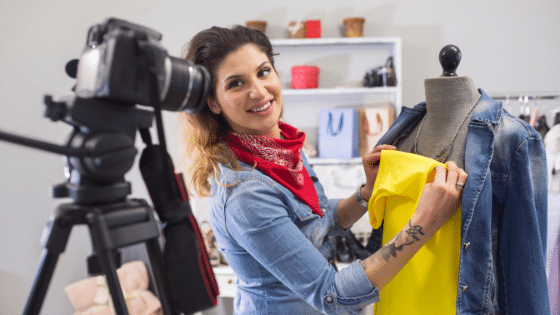 We are being asked to wake up to the environmental and human impacts of the fashion industry – one of the most polluting industries in the world – in the same way as people did when David Attenborough showed the turtle dying from too much plastic in its belly in 2017.  Blue Fashion for a Blue Planet.

Here are just some of the shocking facts in relation to the fashion industry today and our part in it.

Then, consider the chemicals sprayed on cotton crops; the electricity (often from dirty sources such as coal and diesel generators) powering the garment factories; the fossil fuel emissions from transportation of clothing across the seas, and railway and road networks and by air to high street stores. And that’s before we even consider the polluting effects of clothes once we’ve finished wearing them.

The Ellen MacArthur Foundation (an environmental advocacy organisation set up by MacArthur, a retired English yachtswoman) produced  a groundbreaking report in 2017.  According to this report:

“Today’s textile industry is built on an outdated linear, take-make-dispose model, and is hugely wasteful and polluting”.  This report also presented “a vision of a new system based on circular economy principles that offers benefits to the economy, society and the environment”.

The vision for this “new textiles economy” is that clothes will be designed differently, worn longer and rented, resold and reused much more often.  Materials will be recycled, either to make new clothes or for use as insulation, mattress stuffing or wipe cloths. The report has since been endorsed by some big fashion brands including Nike, C&A, and H&M.

The idea is that clothing will be “made to be made again” or composed of materials which will decompose naturally after use, such as grape leather made from by-products from the wine industry.

But the focus on natural fabrics are just one small element of the drive to make the industry more sustainable. Reducing the volume of clothing produced and sold is key.  The future of sustainable fashion will also be about access, over ownership.

“We only actively use about 20 per cent of our clothes, so we need to look at these new ways of sharing, selling and renting.”

“Every time we buy, wear and dispose of clothes, we create an environmental footprint and an impact on the people who make them – most of whom are women,” says Carry Somers, co-founder of Fashion Revolution. Followers of the Fashion Revolution are encouraged to use the #WhoMadeMyClothes hashtag on social media to encourage big brands to confront issues around the working conditions of garment workers.

Safia Minney the ethical fashion designer behind the People Tree Fair Trade fashion brand, believes that social justice and environmental justice issues need to be dealt with at the same time.

“Most brands start with the look, but we start with the skills at each producer group and design the collections up. Women’s development and the environment are central to what we do,” she told the first Circular Fashion Conference in Dublin in April.

How to be a sustainable fashionista

(Thanks to the Climate Queens, Clodagh Kelly and Katie Harrington for some of these sustainable fashion tips taken from the article).