“We have had the grace of listening to the voices of the poor and reflecting on the precariousness of their lives.” ~ Pope Francis. “Can we eat oil?” “This model of development that destroys the life of indigenous people and the planet – this has to change.” ~ Yesica Tayori of the Harakbut people in Peru.

It was not only those present who were heard at this Synod, but also the voices of 87,000 people who were consulted beforehand in an unprecedented project supported through the Church network. All bore powerful witness to the crisis they are facing.

In the Preparatory Document for the Pan-Amazonian Synod issued by Pope Francis on October 15, 2017, the Special Assembly of the Synod of Bishops was called to reflect on the theme: New Paths for the Church for an Integral Ecology recognising that ‘new paths’ for evangelisation must be designed for and with the People of God who live in the Amazonian region drawn from communities and rural   areas of cities and large metropolises, those who live on river banks, migrants and displaced persons, and especially for and with indigenous peoples.

The preparatory document recognised that in the Amazon rainforest, which is of vital importance for the planet, a deep crisis has been triggered by prolonged human intervention, in which a “culture of waste” (LS 16) and an extractivist mentality prevailed. To quote:

“The Amazon is a region with rich biodiversity; it is multi-ethnic, multi-cultural, and multi-religious; it is a mirror of all humanity which, in defense of life, requires structural and personal changes by all human beings, by nations, and by the Church”.

Pope Francis wished to ensure that this synod was a place of encounter, listening and dialogue with others and with the Spirit, in which everyone was invited to let go of expectations and to be open to conversion.

Through the enhanced preparatory process, the increased participation of lay women and men as experts and auditors, were encouraged to speak freely on controversial topics and to have rich discussions in smaller groups.

(Synodality refers to the active participation of the whole People of God in the life and mission of the church, according to the International Theological Commission. It means embracing the diversity of charisms, vocations and ministries of God’s people). 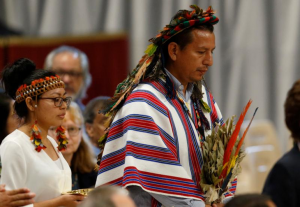 Indigenous people carry offertory gifts as Pope Francis celebrates the concluding Mass of the Synod of Bishops for the Amazon at the Vatican Oct. 27, 2019. (CNS photo/Paul Haring)

The actual Synod took place from the 6-27th October 2019 in Rome.  There, the bishops, together with indigenous witnesses and other experts, were tasked with finding new pathways for the Church to accompany the people of the Amazon.

“It gives us hope that we are not alone,” said indigenous spokesperson Yesica Tayori.

“With the Church working alongside us, we will build actions to defend our common home.”

The Synod’s reflections transcended the strictly ecclesial-Amazonian sphere, because they focused on the universal Church, as well as on the future of the entire planet. This is a process that has at least begun with a specific geographical area and it is hoped that this will provide a bridge to the other important biomes of our world: the Congo basin, the Mesoamerican Biological Corridor, the tropical forests of the Asia Pacific region, and the Guarani Aquifer, among others.  At a Vatican press briefing on the first day of the Synod on October 16th, Giacomo Costa, S.J., the synod’s secretary for information at the Vatican, said:

“The synod is not a discussion, not a parliament,” but there is “a spiritual dynamic”.  The biblical image, he said, is “the blind man who throws away his cloak to go to God,” and for the synod it means “to leave behind the safety of your arguments.”

The synod “is a path of discernment” that must “leave space for the Spirit”.

Cardinal Michael Czerny, a special secretary for the synod, presenting the final document at a Vatican briefing on October 26th underlined the synod’s call for four conversions (pastoral, cultural, ecological and synodal) because, he said, there are “no new paths” and “no real change” without these conversions.

“With the Amazon burning many more people are realising that things have to change. We cannot keep repeating old responses to urgent problems and expect to get better results.”

Referring to the urgent need for ecological conversion at both the personal and communal levels, the cardinal said the ecological crisis is so deep that if we don’t change, “we’re not going to make it.”

The voice of participants

Several synod participants pointedly challenged Europeans and North Americans to examine and change their lifestyles and engage in political action in solidarity with Amazonian communities who bear the burden of climate change and the activities of multinational companies involved in mining and deforestation.

“People who live in Europe and North America have a heightened responsibility for political action in support of indigenous communities since we live from the benefits of this tragic exploitation in most parts of the world”.

Said Josianne Gauthier at a Vatican briefing on October 14th.  Josianne is the general secretary of CIDSE—Together for Global Justice, an international alliance of Catholic solidarity organisations.  Her role at the synod was “to listen to voices we don’t have direct access to all the time” and to consider how to support indigenous communities after the synod through “political pressure” in international political instruments.

Many urgent issues were discussed at the synod including:

“The Synod brings hope to the communities we work alongside,” says Linda. “We are all called to learn from their wisdom, in order to protect our earth and the future of humanity.” “The atmosphere was inspiring”, says Mauricio López of REPAM who attended as a special advisor: “There was an experience of profound freedom, transparency, trust and fraternity.”

The following summary of the five ‘take-aways’ from the Synod were suggested by Luke Hansen, SJ writing in America: The Jesuit Review :

1. The synod was prophetic in placing Amazonian and indigenous communities at the centre of the synod process and for making a clear option for these communities over foreign economic interests.

2. At the heart of the synod process and the final document is conversion at the pastoral, cultural, ecological and synodal levels.

3. This special synod—the first Synod of Bishops to be organised around a distinct ecological territory—sought to practice what it preached regarding “integral ecology” and care for our common home. In this regard, synod organisers undertook several important measures: implementing an online registration process in order to avoid printing paper; utilising bags, pens and cups made with biodegradable materials rather than plastics; and most significantly, to be a “carbon neutral” synod, the organisers offset the emissions spent to get more than 200 participants from South America to Rome—estimated at 572,809 kilograms of carbon dioxide—with the purchase of 50 hectares (123 acres) of new growth forest in the Amazon.

4. All 120 paragraphs of the synod’s final document (currently available in Spanish only) were approved with the necessary two-thirds majority vote, including proposals related to married priests and women deacons.

5. Since his election as pope in March 2013, Pope Francis has transformed the Synod of Bishops into a privileged place of discernment and conversion.

The next stage of the Synod has begun, as its outcomes are taken back to communities in the nine Amazon countries, and spread throughout the Church. 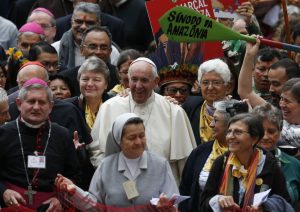 Pope Francis walks in a procession at the start of the first session of the Synod of Bishops for the Amazon at the Vatican Oct. 7, 2019. (CNS photo/Paul Haring)

“The synod is a son, a daughter, of ‘Laudato Sí,’” the encyclical published by Pope Francis in 2015, said Mauricio López, the executive secretary of the Pan-Amazonian Ecclesial Network, in an interview .

“The synod is not the end of the road,” Mr. López said, “but the beginning of a new stage for the church in the Amazon, planting the seeds of metanoia, of radical conversion, from within, at this kairos moment.”

Even though these highly debated proposals had the most votes against them, the synod was able to find language to satisfy large majorities of voting members. It is a remarkable accomplishment, considering that even discussion about such questions was strongly discouraged in previous papacies.

“Perhaps the single overarching message of the Synod is that we are all called to a true and ecological conversion, to a simple and modest style of life” (final document #17).

In a gesture of prophetic witness, Synod members re-committed to the ‘Pact of the Catacombs,’ originally signed in 1965, to pledge a life of simplicity, sustainability and solidarity with the poorest people.

“At the heart of the synod process and the final document is conversion at the pastoral, cultural, ecological and synodal levels”.

Walking together in an ecclesial kairos