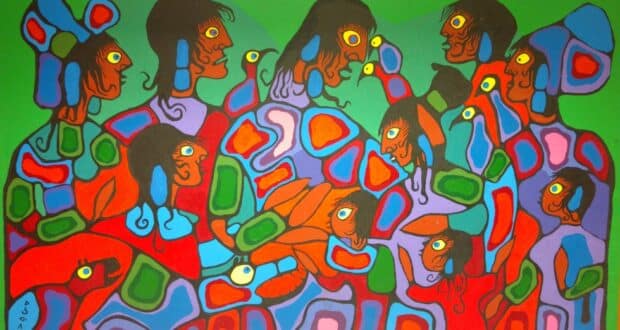 The International Day of the World’s Indigenous Peoples is observed on 9 August every year.  The theme for 2022 is: “The role of indigenous women in the preservation and transmission of traditional knowledge”.

“The vastness of this land makes us think of the lengthy path of healing and reconciliation that we are facing together.”

During  these days, reflecting on the recent  penitential pilgrimage of reconciliation undertaken by Pope Francis with the Indigenous Peoples of Canada, and also bearing in mind that the goal of the International Presentation Association is: ” ..  to honour and advance the rights of Women and Children, Indigenous and Tribal People and the Earth”, it is good to share some of the insights and inspirations from this journey of Pope Francis which is helpful for our own journey of walking together with Indigenous and Tribal Peoples as well as growing  our contribution towards intercultural  understanding and advocacy. (See IPA Website (globalpres.org)

The above short video by Cardinal Michael Czerny* reflects on the Pope’s journey to Canada – ‘Learning to walk together’ and is a powerful source for meditation.

Pope Francis recalled that he came to Canada as a pilgrim and as “a friend in order to meet you and to see, hear, learn, and appreciate how the indigenous peoples of this country live.”

“I have come as a brother, to discover first-hand the good and bad fruit borne by members of the local Catholic family in the course of the years,” he said. “I have come in a spirit of penance, to express my heartfelt pain at the wrong inflicted on you by not a few Catholics who supported oppressive and unjust policies in your regard.”

The Pope expressed his hopes that his visit may advance the “search for truth” to help in healing and reconciliation, while sowing “seeds of hope” for future generations. The statue ‘Mary Untier of Knots’ by sculptor, Timothy Schmalz.

A statue of ‘Mary, Untier of Knots’  was gifted by Pope Francis to the indigenous people during his visit. The Canadian sculptor Timothy Schmalz had been  commissioned by the Vatican.  He said, “the Vatican loved it and then they showed pictures of it to Pope Francis and he decided he wanted to give it to the Indigenous people.” Following Pope Francis’ prayer service at Lac St Anne in Alberta on 26 July, he unveiled and blessed the life-size sculpture.

“It’s a sculpture of Mary untying a knot around the world, and, in a sense, that’s what Pope Francis is coming here to do”, Schmalz explained.

The statue has an interactive component to it as well. Orange ribbon, the colour that represents Indigenous people and residential schools, was placed around the globe Mary is standing over. It allows people to tie or untie their own knots.

Schmalz, who is widely known for his ‘homeless Jesus’ statues, said it took him a year to make the new statue. The sculpture will become a permanent fixture at Lac St Anne, a major pilgrim site for Indigenous Catholics.

The powerful role of women 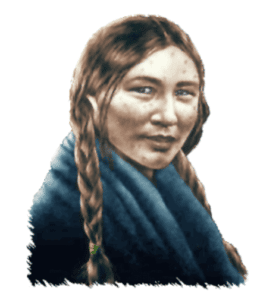 Image of St. Kateri Tekakwitha is by Lisa E. Brown.

Pope Francis praised the importance that indigenous communities put on family and tradition. He also developed this theme on the feast of St. Anne, the patron saint of grandparents.

“In a world that, tragically, is often all too individualistic, how precious is your profoundly genuine sense of family and community. How important it is to cultivate properly the bond between young and old, and to maintain a healthy and harmonious relationship with all of creation!” the pope said.

Pope Francis continued his speech by highlighting the example of three women who he said “best understand how to protect the most important things in life.” The first was St. Anne, who raised the Virgin Mary; the second was Mary herself, the Mother of God, and finally St. Kateri Tekakwitha, the first Native American to be canonized and a member of the Mohawk people.

Both Mary and St. Kateri “received from God a plan for their lives, and, without asking any man, courageously assented to it,” the pope said.

“Those two women could have responded irately to anyone who opposed that plan, or simply submitted to the patriarchal rules of the time and given up, without battling for the dreams that God himself had inspired in them,” he continued. “They chose not to do that, but instead, with meekness and determination, with prophetic words and decisive gestures, they blazed a trail and accomplished what they had been called to do.

“May they bless the journey we now share, and intercede for us and for this great work of healing and reconciliation that is so pleasing to God. I bless all of you from my heart. And I ask you, please, to continue to pray for me,” the Holy Father concluded.

Concrete actions on an authentic path of reconciliation

The visit to Canadian soil, which the Pope carried out joyfully despite having difficulty walking, was marked precisely by “concrete actions”. Those actions preceded and accompanied the Pope’s spoken words in the North American country and, in particular, his calls for justice and forgiveness form a premise for an authentic path of reconciliation.

In some ways, the visit itself can be said to have been a concrete action “of enormous impact,” to borrow Prime Minister Justin Trudeau’s statement. Canadian newspapers published large photos on their front pages in these days to capture such significant gestures.

Every papal journey can (also) be told in pictures. This is perhaps even more true this time, so strong was the symbolic value of the events and meetings, for example:

Particularly evocative was the image of Pope Francis absorbed in meditation on the shores of Lac Ste. Anne, a place that unites indigenous peoples and Catholic faithful in devotion. Even an “ordinary” gesture like the blessing of a sacred image in this context takes on an “extraordinary” value.

When the Pope, in the the Sacred Heart Church of the First Peoples, blessed the statue of Kateri Tekakwitha, the first North American indigenous woman to be proclaimed a saint, he was in fact telling us that the leaven of the Gospel can—indeed must—grow and enrich the peoples it encounters without annulling their identity and cultural and spiritual heritage, because faith is proclaimed not imposed.

Then there was a gesture that did not make the headlines but bears witness not only to the profound meaning of this journey but to one of the guiding principles of the Petrine ministry: the “revolution of tenderness.”

In so many circumstances during the trip, the wheelchair did not hinder the Pope’s closeness to the people. On the contrary, his own condition of fragility made—if possible—the Pope even closer to those who suffer.

Pope Francis never withdrew from the pain of the people he met. Travelling finally to arrive only three hundred kilometres from the Arctic Circle, he concretely reaffirmed with this gesture that the shepherd must have the smell of the sheep, especially the most distant and wounded ones.

His journey, therefore, saw harmoniously interwoven gestures and words, speeches and concrete actions, like the threads of the coloured bands of indigenous robes.

Each gesture became the message. A message of love and reconciliation.

See When the gesture was the message – Pope Francis in Canada

Papal present to the Indigenous People – ‘Mary Untier of Knots’

It was genocide against the Indigenous People – Pope Francis

I leave Canada greatly enriched by the Indigenous People

Note:  Michael F. Czerny SJ (born 18 July 1946) is a Czechoslovakian-born Canadian prelate of the Catholic Church who has been prefect of the Dicastery for Promoting Integral Human Development since 23 April 2022, after serving as interim prefect for several months. He was under secretary of that dicastery’s Migrants and Refugees Section from 2017 to 2022. Pope Francis made him a cardinal in 2019.