Sr. Josephine spent six weeks in Zambia (mainly in the Western Province) in July and August of this year (2019) doing monitoring visits for Misean Cara Projects. This was her first return visit since she left in 2010, and this is the experience she shared.

Lusaka has developed and is on the surface more like a  South African city. But there is poverty and unemployment in the compounds. One of our projects run by Sr. Mary Brennan (the community school in Chipata Compound) was celebrating its 25 years, when she was there.  As she recounts:

The road west to Kaoma is now much busier as people move to  villages near the main road.  In Kaoma, Sr. Mbololwa works in the Government hospital and Ireen and Peggy in the school. In 2014, Presentation Sisters took over the community school, providing for many students who could not find secondary school places, and helped to add on six senior secondary classes. It is the first Presentation School in Zambia. A Grant Aided school whereby the government pays the teachers but the infrastructure is the responsibility of the Presentation Sisters. 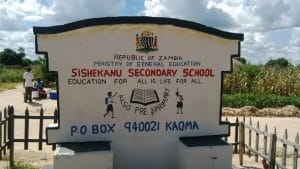 The Project for the extension of the secondary school section is funded by Misean Cara and Presentation Sisters. New classrooms have been built, as up to now they were sharing primary school buildings which caused great overcrowding. An administration block, hall and Computer room are also in place and  Science and Home Economics rooms are underway.

Both teachers and students have had training in Child Safeguarding and on the SDGs over the years. Classes take responsibility for growing fruit and vegetables in the Production Unit, which along with the chickens and the cassava they harvest in Kalukundwe, the Presentation farm, are sold to provide income for school expenses.  Some of the primary school buildings were originally part of Sr. Vianney’s orphanage which has now been phased out.   Other orphanage buildings are on rent to provide income for the further education of the orphans and to provide accommodation for those students who have no extended families and one of the buildings is now a guesthouse run by the Friends of Nano to raise income for their charities.

Nano Farm, a demonstration farm in Kaoma was started by Srs. Inez and Virginia and shows people methods of organic farming and fish farming. Sr. Bella and Sr. Lucy Sebastian live on the farm.

Sr. Numba teaches in the Training College and lives in Cheshire Home (Mongu) as well as being on the Leadership Team.  Srs. Cathy and Stella run the Cheshire Home which had 62 children in July, some of whom were recovering from corrective surgery and all of them had regular physiotherapy. The government has seconded four teachers and the children are in classes according to their ability. There is a great spirit in the Home between children and staff, and children help each other to move about, with various activities including football and group table games in the evening.   Local people support the Home also with visits and gifts.

The Income Generating Activities for Mongu Cheshire Home are Liseli Lodge, which has a restaurant, take away and various types of accommodation and is a commercial success, and Rhino Block products which is at an early stage, as it is having problems with constant power cuts.

I was happy also to spend a few days in Pemba in Southern Province where Sr. Mary Lucey has helped local people with building up three villages with each household having a good portion of land. Judith is teaching in the local school as well as being on the Unit Leadership Team.  I also spent a few days in Livingstone and I went back to the Youth Community Training Centre which is now run by Baptistine sisters on behalf of the Diocese, giving skills training to young people.

The impact of Climate

It is clear that climate still has a huge impact on the quality of life of the people. Since the rainy season last year was very poor, I saw everywhere the effects of drought in the Western and Southern Provinces.  There was no grass for the animals and the price of the staple food, mealie meal was increasing daily, so hunger in the rural areas especially is a big problem. People were depending more on cassava which is a drought resistant crop but less nutritious than maize.

Relief efforts were starting on a small scale from churches and government just as  I was leaving.

For information on the drought situaton:  Food situation in Zambia on the verge of crisis

This piece ‘A window on life in Zambia’ is an extract from an article that first appeared in the Spring-Summer 2019 Issue of Bachloga (Little Shoots) resulting from an interview with Josephine. Bachloga is a quarterly magazine sharing Presentation Life that is produced by the North East Province.
Share
Tweet
0 Shares
Pages: 1 2 3 4 5 6 7 8 9
2019-12-06
Margaret