Living with those ‘kept poor’

Sr. Helen Lenehan shares some of her experiences 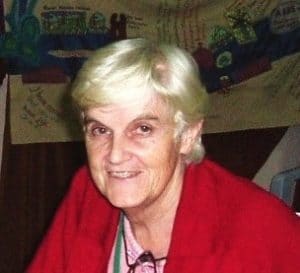 Sr. Helen Lenehan returned to Ireland (to the North East Province) in 2018 after twenty-seven years of life on mission in the Philippines. Helen hails originally from Co. Kilkenny. “When I arrived in the Philippines, in September 1991, there were six Irish Sisters there along with seven Filipina Sisters.  Having studied the language, I got my first assignment in June 1992″.

Indeed, my first venture into adult literacy was met with opposition.  I had gone out to a barrio (a local area) with a young Filipina student and was warmly welcomed.  However, when I arrived, as arranged, on the following Saturday to set up the classes only a handful turned up, and the students with me learned that the military had been informed that I had been in the area.  The fear of the military was still strong and these poorly educated people had been told that I was a communist, and they were not to attend the sessions. The college, administered by the Sisters in the town of Binalbagan, was well known for its effort at education for systemic change, and the Sisters had even been called communist from the altar.

Helen went on to share the day to day reality of living there with the people, naming, addressing and challenging where possible those systems and structures that maintained a poverty of life and livelihood for families and individuals within the communities she got to know well.

She gave a very practical example of the disconnect that often existed between appearance and reality, where in the Haciendas (large plantations) owned by exceedingly wealthy (and often remote) landlords, their employees did not receive a fair wage for their labour.  But yet these same landowners were at the forefront funding and sponsoring large and important international meetings and  projects that raised their profile on the world stage.  It is not just the absentee landlords but also business magnates with extensive wealth  (e.g. some with an estimated wealth of $9 billion) and also of those politicians who while in receipt of congressional funding for development in their local   areas, were thought by the locals to be  providing scholarships ‘out of their own pockets’.  She cites figures from 2013 where 75% of lawmakers in  the Philippines were drawn from political dynasties; 42% of lawmakers in Thailand and correspondingly 22% in Ireland.

No social welfare system exists so this means in real terms that if a family member gets sick, the cost of paying for treatment and medication can decimate families, as it takes all their limited funds or even the ability or capacity of the bread-winner to continue to work. 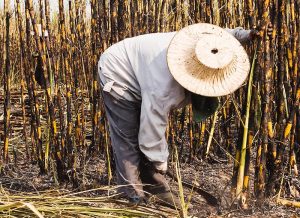 A worker on a sugar cane plantation

Helen also gave an example of the experience of workers on the sugar cane plantations which produce the main food crop of the Philippines. There is a six month growing season and a six month harvest period. During this growing season (called ’The Dead Season’ due to massive unemployment) labour is reduced and people are not paid. The school attendance period also happens to coincide with this growing season, so promissory notes are a big thing – seeking permission to pay later when employment starts again.

The book of the same title: ‘The Dead Season’ published in 1986 by US Journalist, Alan Berlow accurately describes the plantation lifestyle of the hacienderos and the oppression that goes with it, as well as the collusion of the military with the landed gentry.  “It offers a gripping investigation into a savage murder on the Philippine island of Negros. Alan, in his investigation of the murder discovers that the ultimate cause is imbedded in the history and culture of a society locked into cyclones of violent conflict, behind a façade of democratic government”.

The cost of empowerment

Working conditions in the factories are all geared towards maximum production.  Again, Helen shared the example of a doll factory that produced really high class expensive dolls for export. The factory makes the elaborate and beautiful clothes for these dolls. On the factory floor, the backs of the chairs of the seamstresses have been removed so they cannot sit back with ease and potentially produce less. One woman Helen knew who worked there, was forced to purchase from her already small wages the clothes she had produced, as she had pricked her finger on a needle which had bled onto the material so the item could not be sold. This woman was supported to recognise the injustice of this and to say it to her    employer – but as a result lost her job.

Helen has shared in the lived experience of the people in their communities, and she cites a comment made to her by a South American man, to highlight the problems and the challenges of empowering the poor, such as peasant farmers to assert their lives, he said:  “Religious are lucky and privileged, since if their lives are in danger, they can be taken out of the country by their Order, but the poor have no redress”.  They (the peasant farmers) are the people who are being killed by the hired killers of the landlords.

What does justice look like for those ‘kept poor’ by systems and structures that could be interpreted as a measure of success on the global stage?

This piece ‘Living with those kept poor’ is an extract from an article that first appeared in the Spring-Summer 2019 Issue of Bachloga (Little Shoots) resulting from an interview with Helen. Bachloga is a quarterly magazine sharing Presentation Life that is produced by the North East Province.
Share
Tweet
0 Shares
Pages: 1 2 3 4 5 6 7 8 9
2019-12-06
Margaret