Featured News
Home / News / Is chocolate worth this suffering? 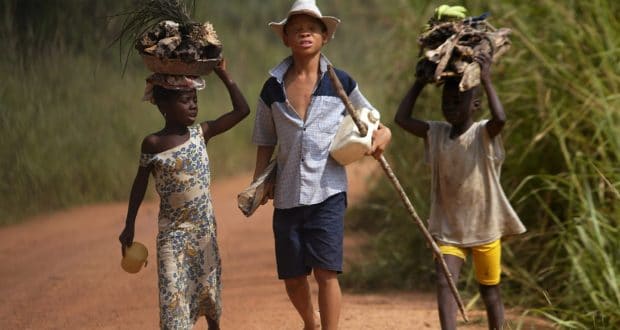 Is chocolate worth this suffering?

The world’s chocolate companies have continually missed deadlines to uproot child labour from their cocoa supply chains in 2005, 2008 and 2010. Next year, they face another target date and, industry officials indicate, they probably will miss that, too.

About two-thirds of the world’s cocoa supply comes from West Africa where, according to a 2015 U.S. Labour Department report. More than two million children were engaged in dangerous labour in cocoa-growing regions.

According to the U.S. Labour Department, the majority of these two million child labourers in the cocoa industry are living on their parents’ farms, doing the type of dangerous work — swinging machetes, carrying heavy loads, spraying pesticides — that international authorities consider the “worst forms of child labour.

A smaller number, those trafficked from nearby countries, find themselves in the most dire situations.  In the words of one farmer:

“He considers the boys’ treatment unfair but hired them because he needed the help. The low price for cocoa makes life difficult for everyone”, and

“I admit that it is a kind of slavery,” the farmer said. “They are still kids and they have the right to be educated today. But they bring them here to work, and it’s the boss who takes the money.”

What makes the eradication of child labour such a daunting task is that, by most accounts, its roots lie in poverty.

The reality  of poverty 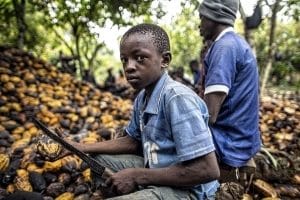 The typical Ivorian cocoa farm is small — less than 10 acres — and the farmer’s annual household income stands at about $1,900, according to research for Fairtrade, one of the groups that issues a label that is supposed to ensure ethical business methods. That amount is well below levels the World Bank defines as poverty for a typical family.

In addition, about 60 percent of the country’s rural population lacks access to electricity, and, according to UNESCO, the literacy rate of the Ivory Coast reaches about 44 percent.

With such low wages, Ivorian parents often can’t afford the costs of sending their children to school — and they use them on the farm instead.  Other labourers come from the steady stream of child migrants who are brought to Ivory Coast by people other than their parents.   At least 16,000 children, and perhaps many more, are forced to work on West African cocoa farms by people other than their parents, according to estimates from a 2018 survey led by a Tulane University researcher.

Upon arriving in Ivory Coast’s cocoa-growing areas, child migrants are used to meet the demand on cocoa farms for arduous manual labour and stay year-round. There is land to be cleared, typically with machetes; sprayings of pesticide; and more machete work to gather and split open the cocoa pods. Finally, the work involves carrying sacks of cocoa that may weigh 100 pounds or more.

A failure to act 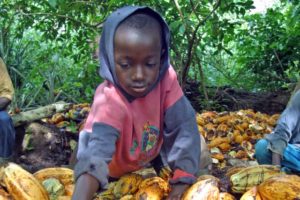 When asked this spring, representatives of some of the biggest and best-known brands — Hershey, Mars and Nestlé — could not guarantee that any of their chocolates were produced without child labour.

One reason is that nearly 20 years after pledging to eradicate child labour, chocolate companies still cannot identify the farms where all their cocoa comes from, let alone whether child labour was used in producing it.  Mars, maker of M&M’s and Milky Way, can trace only 24 percent of its cocoa back to farms; Hershey, the maker of Kisses and Reese’s, less than half; Nestlé can trace 49 percent of its global cocoa supply to farms.

Industry promises began in 2001 when, under pressure from the U.S. Congress, chiefs of some of the biggest chocolate companies signed a pledge to eradicate “the worst forms of child labour” from their West African cocoa suppliers. It was a project companies agreed to complete in four years.  To succeed, the companies would have to overcome the powerful economic forces that draw children into hard labour in one of the world’s poorest places. And they would have to develop a certification system to assure consumers that a bag of M&M’s or a Reese’s Peanut Butter Cup did not originate with the swinging of a machete by young child.

Since then, however, the chocolate industry has scaled back its ambitions.

While the original promise called for the eradication of child labour in West African cocoa fields and set a deadline for 2005, next year’s goal calls only for its reduction by 70 percent.

“The companies have always done just enough so that if there were any media attention, they could say, ‘Hey guys, this is what we’re doing,’ ” said Antonie Fountain, managing director of the Voice Network, an umbrella group seeking to end child labour in the cocoa industry. “It’s always been too little, too late. It still is.”

“We haven’t eradicated child labor because no one has been forced to,” Fountain added. “What has been the consequence . . . for not meeting the goals? How many fines did they face? How many prison sentences? None. There has been zero consequence.”

Certification is not enough

As the industry struggled to come up with its own system for monitoring child labour, it increasingly turned to third parties to tackle the problem.  Three non-profit groups — Fairtrade, Utz and Rainforest Alliance — provide labels to products that have been produced according to their ethical standards, which include a prohibition on child labour.

Over the past decade, the chocolate companies have pledged to buy increasing amounts of cocoa certified by one of these three groups. Mars reports buying about half of its cocoa from certified sources; Hershey reports 80 percent. In exchange for meeting the groups’ ethical standards, farmers are paid as much as 10 percent more for their cocoa.

Yet some of the companies acknowledge that such certifications have been inadequate to the child labour challenge. The farm inspections are so sporadic, and so easily evaded, that even some chocolate companies that have used the labels acknowledge they do not eradicate child labour.  Inspections for the labels typically are announced in advance and are required of fewer than 1 in 10 farms annually, according to the groups.  “Put simply, when the [certification] auditors came, the children were ushered from the fields and when interviewed, the farmers denied they were ever there,” according to a 2017 Nestlé report.

One day this March, Amadou Sawadogo, 18, was preparing a patch of forest for a cocoa farm near the village of Blolequin, by the Liberian border.  He said he had been living in Burkina Faso and, when he was 16, came to Ivory Coast after “my father . . . asked [me] to come and look for money here.”  Like others here, he said it was common for Burkinabe children to come with traffickers to work in Ivory Coast and that the financial arrangements are well-known. There are about 30 young Burkinabe working around Blolequin, he said. Payments from the traffickers to parents depended on a child’s age. For a 15-year-old, he said, parents would be paid about $250. Once on the Ivorian farms, the boys make a little bit of money, typically less than a $1 per day, Sawadogo said.

Child labour and child trafficking have flourished nonetheless because of the country’s inability to enforce the laws.

After missing the 2010 deadline, the industry established a less ambitious goal — to get a 70 percent reduction in child labour — and to do so by 2020. That goal, too, is unlikely to be met, the industry has indicated, and there is still no plan for consumer labels.

Meanwhile, some experts note, what might be the most straightforward means of addressing child labour is scarcely mentioned: paying the farmers more for their cocoa.  More money would give farmers enough to pay for their children’s school expenses; alleviating their poverty would make them less desperate.

Under the Fairtrade program, cocoa farmers receive an extra 10 percent or more of prices, but that is not enough to lift the typical Ivorian farmer out of poverty.

One small Dutch company, Tony’s Chocolonely, is paying an even bigger premium — about 40 percent more, in an attempt to provide a living wage. For a metric ton of cocoa beans that would normally fetch $1,300, Tony’s pays an extra $520, or about $1,820.  Asked how likely it might be for other companies to follow suit, Paul Schoenmakers, a Tony’s company executive, noted that many of the large chocolate brands may fear giving their competitors a price advantage by paying more.

Schoenmakers said their premium cocoa price adds less than 10 percent to the cost of a typical chocolate bar.

“There’s no economic textbook or management book that thinks that [paying more] is a good idea,” he said.

But to Schoenmakers, it’s a simple matter.

“Nobody needs chocolate,” he said. “It’s a gift to yourself or someone else. We think it’s absolute madness that for a gift that no one really needs, so many people suffer.”

Note: this extract has been taken from a full article by Peter Whoriskey and  Rachel Siegel on 5th June 2019 in the Washington Post. See full article HERE