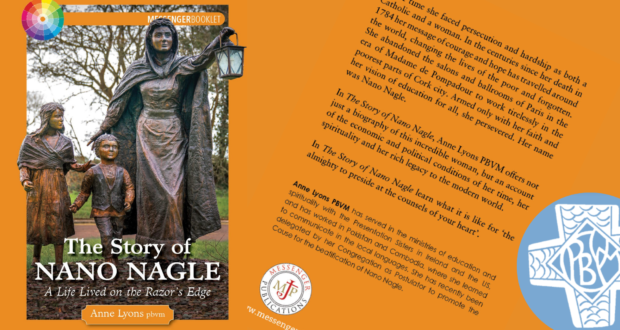 Life lived on the ‘Razor’s Edge’

Abandoning a life of privilege, position and wealth, Nano Nagle chose to live and work in her beloved city of Cork, working in solidarity with those made destitute.

Driven by a burning passion to help Christ’s marginalised, she dared not only to dream a better life for them but to make this seemingly impossible dream a lived reality. This was the great miracle of her life. At a time when the role of women in shaping society was severely restricted, she lived on the razor’s edge, a woman fearless before a tyrannical world.

Nano Nagle is one of the most widely-recognised names in the history of religion and education in Ireland. Born into a wealthy family in 1718, she abandoned a life of privilege and position, choosing instead to live and work in solidarity with those made destitute in her beloved city of Cork.

In The Story of Nano Nagle: A Life Lived on the Razor’s Edge, author Sr. Anne Lyons, pbvm documents the story of this remarkable woman, a pioneer of her time, whom Mary McAleese has referred to as ‘an extraordinary woman’.

Driven by a burning passion to help Christ’s marginalised, Nano dared not only to dream a better life for them but to make this seemingly impossible dream a lived reality. This was the great miracle of her life. Her legacy is particularly remarkable given the context of the times she lived in, where women did not have a voice in any public domain.

Nano transcended boundaries and overcame many obstacles in the pursuit of her vision – the feeding and education of the poor and destitute children of Cork. The impact of her work stretched far beyond the seven schools around the city which she established and the religious order which she founded, the Presentation Sisters, had at its height over 500 schools around the world. Nano Nagle was declared Venerable by Pope Francis in 2013.

Anne Lyons, pbvm has served in the ministries of education and spirituality with the Presentation Sisters in Ireland and the US, and has worked in Pakistan and Cambodia, where she learned to communicate in the local languages. She has recently been delegated by her Congregation as Postulator to promote the Cause for the beatification of Nano Nagle.

The Story of Nano Nagle: A Life Lived on the Razor’s Edge by Anne Lyons is published in Ireland and the UK by Messenger Publication. Price €4.95/£4.50

See The Story of Nano Nagle: A Life Lived on the Razor’s Edge (messenger.ie)

Note:  Details included in this post are from  Carolanne Henry, Communications and Marketing Executive at www.messenger.ie