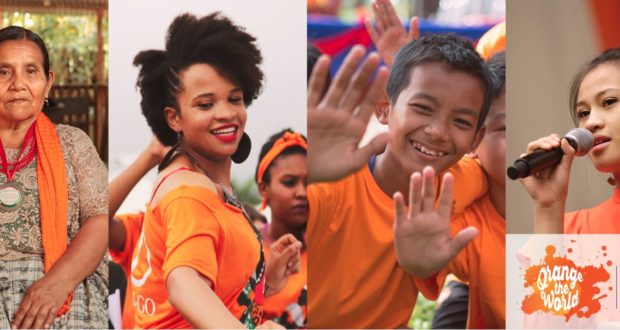 The official commemoration of the United Nations International Day for the Elimination of Violence against Women (25 November) took place on Monday, 19 November 2018, at United Nations Headquarters, New York.  This commemoration brought together survivors and activists under the theme of Orange the World: #HearMeToo, leveraging their voices and work on ending violence against women and girls. 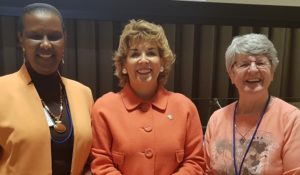 Photo: Sr. Ann Marie Quinn (right) Exec. Director of IPA at Commemoration Day with UN Ambassadors to the UN from Rwanda and Ireland.

Research shows that the pandemic of violence against women and girls (affecting one in three women in their lifetime) is not a recent phenomenon. Yet, in recent months we have reached a tipping point, in large part due to the determination and bravery of grassroots activists and survivors and global social media conversation such as “#MeToo”.  No country, no organisation is immune to sexual harassment and violence, and women and girls from all corners of the world still experience gender-based violence and abuse.

During the 16 Days of Activism Against Gender-Based Violence (an annual global campaign from 25 November to 10 December) efforts will broaden that conversation, and highlight the voices and activism of survivors of violence and advocates around the world. It will showcase their stories, and their solutions.

This commemoration event kicked off the global campaign under the umbrella of the UN Secretary-General’s campaign, UNiTE to End Violence against Women.  For the 16 Days there will be a compilation  of  resources available (see links below) featuring the stories of some of the brave women and men who are paving the way for a safer, more equal and better world for all.  Join them as they say #HearMeToo.

This year, the 16 days of Activism will be a rallying moment to bring together governments, communities, activists and individuals to raise awareness on the urgent need to end violence against women and girls through high-profile events, rallies and campaigns around the world, standing in solidarity with survivors, advocates, the women’s movement and women’s human rights defenders. To draw global attention to the issue, iconic buildings and monuments will be lit up in orange, the official colour of the campaign, symbolizing hope and a violence-free world.

About the IPA:   The International Presentation Association (IPA) is a networking of the various congregations of Sisters of the Presentation of the Blessed Virgin Mary around the world, formed to foster unity and to enable collaborations for the sake of mission.  In their work as a group of global Presentation people responding to the cry of the Earth and the cry of those made poor they work with other NGOs at the United Nations to try to influence world governments to adopt policies that promote justice and peace in their own countries and in the whole world. See: Information on IPA HERE

© Copyright 2022 - Presentation Sisters Union North East Ireland - All rights reserved | Website by Digital Training Institute
9 Shares
Share9
Tweet
We use cookies to ensure that we give you the best experience on our website. By your continued use of this site you accept such use.ACCEPTREAD MORE