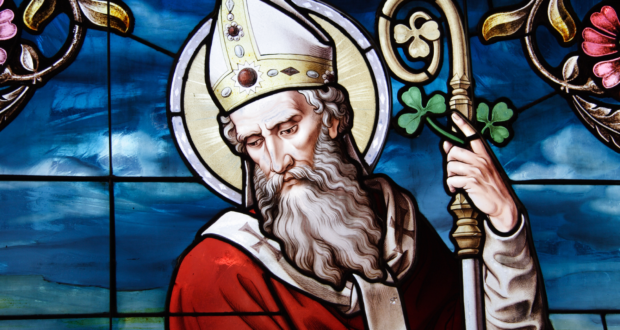 Who is this man Patrick, who came among us (from another place) and whom we have never forgotten?  A man who suffered a turbulent and challenging journey through experiencing at times hunger, isolation, separation and imprisonment, doubting often his own capacity and ability to act – but certain of the hand of God and his protection.  What better way to discover who he was and how he lived than from his own words:

“My name is Patrick. I am a sinner, a simple country person, and the least of all believers. I am looked down upon by many”.

“It’s a long story – to tell each and every deed of mine, or even parts of it. I’ll make it short, as I tell of how the good God often freed me from slavery, and from twelve dangers which threatened my life, as well as from hidden dangers and from things which I have no words to express”. […]  God knows all things even before they are done, and I have him as my authority that he often gave me warnings in heavenly answers, – me, a wretched orphan”!

“ ….for twenty eight days we travelled through a wilderness. Food ran out, and great hunger came over [us]. The captain turned to me and said: “What about this, Christian? You tell us that your God is great and all-powerful – why can’t you pray for us, since we’re in a bad state with hunger? There’s no sign of us finding a human being anywhere!”

Then I said to them with some confidence: “Turn in faith with all your hearts to the Lord my God, because nothing is impossible for him so that he may put food in your way – even enough to make you fully satisfied! He has an abundance everywhere.”

With the help of God, this is actually what happened! A herd of pigs appeared in the way before our eyes! They killed many of them and there they remained for two nights, and were fully restored, and the dogs too were filled. Many of them had grown weak and left half-alive by the way. After this, they gave the greatest of thanks to God, and I was honoured in their eyes. From this day on, they had plenty of food”.

” … it is right to make known the gift of God and his eternal consolation. It is right to spread abroad the name of God faithfully and without fear, so that even after my death I may leave something of value to the many thousands of my brothers and sisters – the children whom I baptised in the Lord”.

He says that he I didn’t deserve at all that the Lord would grant him such great grace, after hardships and troubles, after captivity, and after so many years, and that when he was young, he had never hoped for or even thought it would be so.

After Patrick arrived in Ireland, he tended sheep every day, and prayed frequently during the day. More and more he says: “as the love of God increased, and my sense of awe before God, Faith grew, and my spirit was moved, so that in one day I would pray up to one hundred times, and at night perhaps the same. I even remained in the woods and on the mountain, and I would rise to pray before dawn in snow and ice and rain. I never felt the worse for it […]  as I realise now, the spirit was burning in me at that time”.

Another time he describes his experience of praying:

“… I saw in me one who was praying. It was as if I were inside my body, and I heard above me, that is, above my inner self. He prayed strongly, with sighs. I was amazed and astonished, and pondered who it was who prayed in me; but at the end of the prayer, it was clear that it was the Spirit. At this I awoke, and I remembered the apostle saying: “The Spirit helps the weaknesses of our prayer; for we do know what it is we should pray, but the very Spirit pleads for us with unspeakable sighs, which cannot be expressed in words.” And again: “The Lord is our advocate, and pleads for us.”

Today on St. Patrick’s Day let us find the best way to celebrate his life and ours, his life in ours.

Dear St. Patrick,
in your humility you called yourself a sinner,
but you became a saint.
You prompted countless people
to find and follow God in their live.
Many of their descendants in turn
spread the Good News in numerous foreign lands.
Through your powerful intercession with God,
help us to continue the work you began
wherever we are, and wherever God calls us to be.

Tradition holds that Patrick was enslaved as a youth, and tended sheep for about six years, from the ages of 16 to 22. It was during this time that Patrick discovered God, and  turned to him in frequent prayer as his only consolation in his loneliness.  In a vision he was encouraged to escape and return home.  Our copies of the writings of Patrick are in “manuscript” – hand-written. There are eight manuscripts in existence. The oldest (807 A.D.) is in the Book of Armagh in Trinity College, Dublin. Nowadays, we usually think of a “confession” as when a person acknowledges some guilt for wrongdoing. An older use has other meanings. The ‘Confession of St. Patrick’ is mostly about the telling of the greatness of God as Patrick has experienced it in his own life, despite all his limitations.