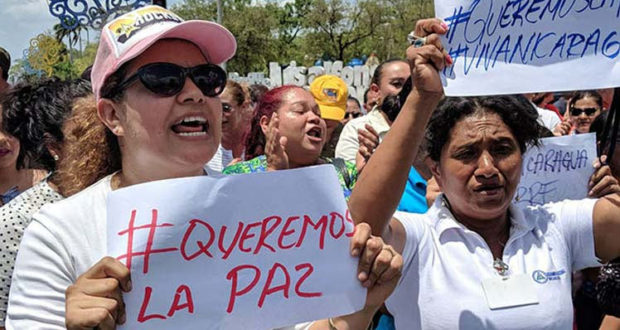 Violence has racked the country of Nicaragua since April 18th.  More than 360 people have died in conflict between forces of Nicaraguan President Daniel Ortega and opposition protesters, who are calling for his resignation. President Ortega has been in power since 2007 and is on his third mandate, along with his wife Rosario Murillo, the Vice President.  Yet it has all but dropped off the news media.

In a statement released on Tuesday of this week, the Apostolic Nuncio,  in Nicaragua, Archbishop Waldemar Stanisław Sommertag called it a “tragic moment” for the country, and he has made the following strong appeal for an end to the violence.

“I wish to express, on behalf of the Holy Father and the Holy See, my deep concern for the grave situation the country is facing. Obviously, it is unacceptable to think that the dead and victims of violence can solve the political crisis and guarantee a future of peace and prosperity in Nicaragua,” he said.

Archbishop Sommertag said he and Pope Francis “weep for all the dead and pray for their families”.

“With all my human and spiritual strength, I appeal to the consciences of all to reach a truce and return quickly to a national dialogue to seek together an adequate solution to solve the crisis,” he said.  The Nuncio said the country places itself under the protection of the Blessed Virgin Mary and asks “for her help so that she may always guide our beloved Nicaragua.”

An Appeal by  Sister Xiskya Valladares
I was reminded of Tuesday’s statement  when I saw today on Facebook a post by the Chapel for Unity, Coventry  which shared extracts from a blog piece by a Nicaraguan nun living in Spain, Sister Xiskya Valladares.  She has appealed to the international community to intervene in her country to stop the bloodshed.

She writes in her blog and on social media:

“I am just a Catholic nun. Nobody has asked me to write to you. But … I cannot stand and watch like a dictator massacre his people while you remain silent”.

“We are a small population of only six million inhabitants, which has no oil and is not important for your interests” …. “but we are talking about human beings with profound values, with great courage, in a strategic place in Central America. They deserve your help.”

In her piece she then goes on to list some of the major atrocities that have been committed by the regime of Daniel Ortega and to ask the world’s rulers to leave aside “at least for once, political and economic interests” and to show their humanity. “It is not a question of ideology, religion or politics. It is a question of humanity”, “you have been elected to make the world more human”, “the people of Nicaragua need you now. Please, act. Do it soon, before they kill us all.”

Sister Xiskya concludes with a specific request: “I do not ask for military actions. I ask for actions of diplomatic pressure: the condemnation for crimes of human injury” and with a plea: “help the people of Nicaragua. Stop this massacre, please.”

Let’s renew our prayer for the safety of all the Nicaraguan people and for those living and working there, who are committed to finding a peaceful resolution, that this may come about.

See also a link to an account of a Presentation High School visit with 10 students  to 2 local schools in Somotillo (Nicaragua) in 2017:  Presentation School Visit in 2017