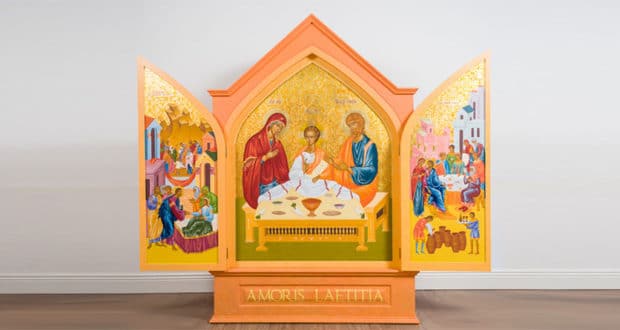 Image of the Icon created for WMOF2018

Reacting to the announcement that Pope Francis will attend the WMOF2018 in August, the Irish Catholic Bishops’ Conference said:

“On behalf of the faithful of Ireland we warmly welcome today’s announcement, by the Holy Father himself, that he plans to visit Dublin in August for the World Meeting of Families.  We are deeply honoured that Pope Francis will come to our country to participate in this universal Church celebration of faith and joy, as well as of the contemporary challenges which face families.  With great anticipation we also look forward to hearing the apostolic guidance of His Holiness during his stay with us.”

The Pope will arrive in Dublin on Saturday, 25 August 2018. He will take part in the ‘Festival of Families’ in Croke Park stadium, which will feature personal stories of faith shared by families, each representing the five continents.  On Sunday 26 August 2018, Pope Francis will preside at Holy Mass in the Phoenix Park which will close the five day event.

During the General Audience on Wednesday 21st March, two Irish families presented the official WMOF2018  ‘Icon of the Holy Family’ to Pope Francis.  Among those participating at the presentation were Archbishop Diarmuid Martin, President of WMOF2018, Father Tim Bartlett, Secretary General of WMOF2018 and the iconographer Mr Mihai Cucu.

© Copyright 2022 - Presentation Sisters Union North East Ireland - All rights reserved | Website by Digital Training Institute
5 Shares
Share5
Tweet
We use cookies to ensure that we give you the best experience on our website. By your continued use of this site you accept such use.ACCEPTREAD MORE