Our province in action 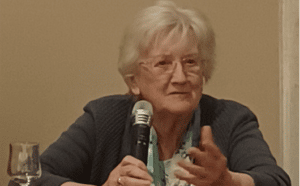 Sr. Imelda Wickham is relentless in her demand for a restorative rather than a punitive criminal justice system. After 20 years as a prison Chaplain, she articulated her arguments in a book launched last year by Messenger Publications: ‘Unheard Voices: Reflections of a Prison Chaplain’.

In Mount St. Anne’s Retreat & Conference Centre on 23rd May, Imelda headed up a public event with experts in the field, in an effort to find new and creative ways of developing a more humane and holistic justice system. lan O’Donnell, Professor of Criminology at UCD, Seán Duggan, Head of Irish prison Chaplaincy Services, and Peter McVerry SJ founder of the Peter McVerry Trust joined Imelda to discuss options with an engaged public audience.

They called for a public debate on how we can improve our outdated and ineffective system and contribute to a change of mindset among politicians and the public at large, to reduce recidivism, support re-engagement with the community and develop a more holistic system.

Imelda urged people to use their voices, expertise and influence to generate this seismic change – and not to allow her book and their work to go the way of the Whitaker Report (1985).

“We need game-changers like Imelda to call out a broken system, but she needs a broad spectrum of support to roll up their sleeves, bring the discussion to the public square, in order to generate seismic change”, tweeted Messenger Publications after the event.