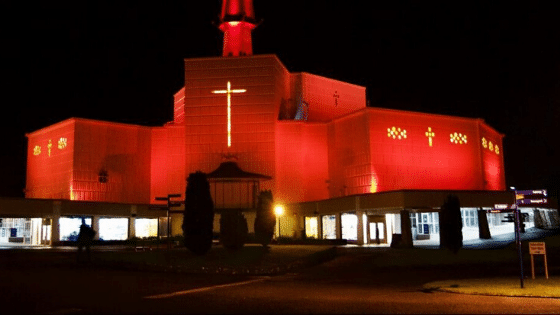 Red Wednesday is an initiative of the organisation, Aid to the Church in Need (ACN) which aims to focus the attention of the western world on the problematic situation that persecuted Christians are facing and to show them our compassion. On this occasion, several churches and public buildings around the world are lit in red.

“The persecution of Christians is worse today than at any time in history. In terms of the numbers of people involved, the gravity of the acts committed, and their impact, not only are Christians more persecuted than any other faith group, but ever-increasing numbers are experiencing the worst forms of persecution.” ( see ACN Website )

Red Wednesday is organised between the 20th of November and the 1st of December in most countries as a mark of solidarity with Christians throughout the world who are persecuted because of their faith.

Red Wednesday Prayer Vigils will take place across the country on 27 November. Simply contact your local parish priest to see where there is one taking place near you, or — even better — take the initiative with your parish team to host one.

Archbishop Eamon Martin will lead a ‘Liturgy of Witness’ tomorrow, Red Wednesday, in Saint Patrick’s Cathedral, Armagh, as part of a special ‘Week of Witness’.  The ‘Week of Witness’ is an invitation to Christians across the island of Ireland to stand in solidarity with, and bear witness to, the heroic example of our persecuted brothers and sisters in faith across the world.  During the celebration, two young people will speak with Archbishop Eamon on how they witness faith in their every day lives.

“On this #RedWednesday I invite you to pray for the gift of courage, the grace of witness and loyalty to Christ for Christians all over the world and especially for those who continue to be challenged, attacked, displaced or even murdered for what they believe in.” ~ Archbishop Eamon Martin

© Copyright 2022 - Presentation Sisters Union North East Ireland - All rights reserved | Website by Digital Training Institute
23 Shares
Share23
Tweet
We use cookies to ensure that we give you the best experience on our website. By your continued use of this site you accept such use.ACCEPTREAD MORE