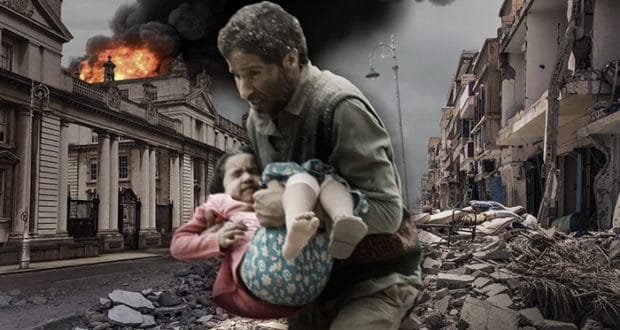 Send an SOS for Syria

Every day the reality of ‘our suffering world’ is brought to the fore. It can often times a ‘news item’ for a matter of hours or at best a few days or weeks, and then life moves on to the next live broadcast.

It is 7 years ago since the reality of the suffering of the people in Syria first came to our attention through the media.  This conflict  to date, has resulted in the deaths of over 500,000 people, with a further 5.5 million fleeing the country and 6.1 million people internally displaced within Syria.

A two-day international conference on the future of Syria, is currently taking place (starting today, 24th April 2018) in Brussels.  This gathering of participants from 85 countries comes against the backdrop of the recent alleged chemical weapons attack in Douma, and the retaliatory airstrikes by Britain, France and the US.  The further escalation of military intervention in response to the recent use of chemical weapons, which killed dozens of civilians, will lead to more suffering for those trapped in the conflict.

With the civil war in its eighth year, it is hoped the meeting will boost international donations and relaunch the stalled UN peace process.

Ireland’s Minister for International Development, Mr. Ciaran Cannon will attend the meeting and he is expected to announce increased funding to the region tomorrow.

What can be done?

Ask your representative to tell Minister Ciaran Cannon or Prime Minister Theresa May, as they prepare for the Syria Donor Conference in Brussels on April 24th & 25th, that Ireland and the UK must do more to protect civilians in Syria.

In the link from Trocaire below you will see respective emails to TDs and MPs, the appropriate email will be sent on your behalf when you sign up.

Let us also  continue to pray for Peace.

Note: Trócaire was established by the Catholic Church in 1973 as a way for Irish people to donate to development and emergency relief overseas. Our dual mandate is to support the most vulnerable people in the developing world, while also raising awareness of injustice and global poverty in Ireland.  (The image used is from the Trócaire posting).

© Copyright 2022 - Presentation Sisters Union North East Ireland - All rights reserved | Website by Digital Training Institute
2 Shares
Share2
Tweet
We use cookies to ensure that we give you the best experience on our website. By your continued use of this site you accept such use.ACCEPTREAD MORE