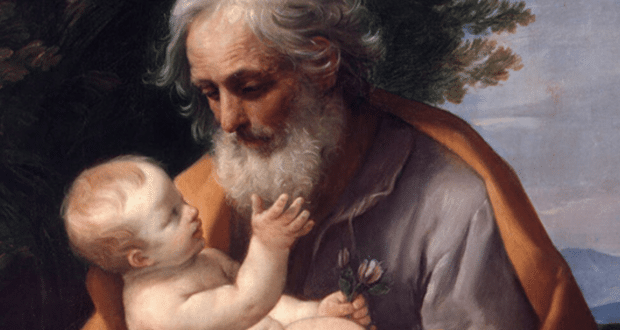 St. Joseph a true father to us

When Pope Francis announced the Year of St. Joseph on the 8th December, he also gave us a new prayer. May it be our prayer in the coming year and beyond as we discover St. Joseph a true father to us.

Every day for 40 years, Pope Francis has challenged St Joseph. After saying Morning Prayer, Pope Francis writes in Patris corde, he recites a nineteenth century prayer from a French prayer book of the Congregation of the Sisters of Jesus and Mary.  It expresses devotion and trust, and even poses a certain challenge to Saint Joseph:

“Glorious Patriarch Saint Joseph, whose power makes the impossible possible, come to my aid in these times of anguish and difficulty. Take under your protection the serious and troubling situations that I commend to you, that they may have a happy outcome. My beloved father, all my trust is in you. Let it not be said that I invoked you in vain, and since you can do everything with Jesus and Mary, show me that your goodness is as great as your power. Amen.”

Through this prayer, the Pope entrusts both “serious and troubling situations” to St Joseph as the prayer ends with  “Let it not be said that I invoked you in vain”.

Joseph is a man who goes “unnoticed”, who welcomes the mystery and puts himself at its service, never putting himself at the centre, but who resolves things that are impossible. In Patris corde, the Pope describes many of St Joseph’s qualities as a true husband and father, the fiancé who “accepted Mary unconditionally” and the man in whom “Jesus saw the tender love of God”.

The Holy Father wrote Patris corde against the backdrop of the Covid-19 pandemic, which, he says, has helped us see more clearly the importance of “ordinary” people who, though far from the limelight, exercise patience and offer hope every day. In this, they resemble Saint Joseph, “the man who goes unnoticed, a daily, discreet and hidden presence,” who nonetheless played “an incomparable role in the history of salvation.”

This rich, timely and beautiful letter is a meditation on our lives too – on love, on fatherhood, on the value of service and faithful invisibility.

The letter can be read in full at the link above as well as at the end of the piece, but in the meantime the following are a few beautiful signposts taken from it.

With a father’s heart 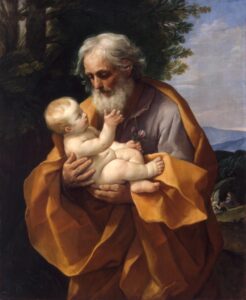 (Image: ‘St. Joseph with the Infant Christ in his arms’, Guido Reni)

Joseph’s spiritual path “is not one that explains, but accepts” — which does not mean that he is “resigned.” Instead, he is “courageously and firmly proactive,” because with “Holy Spirit’s gift of fortitude,” and full of hope, he is able “to accept life as it is, with all its contradictions, frustrations and disappointments.”

In practice, through St. Joseph, it is as if God were to repeat to us: “Do not be afraid!” because “faith gives meaning to every event, however happy or sad,” and makes us aware that “God can make flowers spring up from stony ground.” Joseph “did not look for shortcuts but confronted reality with open eyes and accepted personal responsibility for it.” For this reason, “he encourages us to accept and welcome others as they are, without exception, and to show special concern for the weak”. (4)

Patris corde highlights “the creative courage” of St. Joseph, which “emerges especially in the way we deal with difficulties.” “The carpenter of Nazareth,” explains the Pope, was able to turn a problem into a possibility by trusting in divine providence.” He had to deal with “the concrete problems” his Family faced, problems faced by other families in the world, and especially those of migrants.

St. Joseph is “the special patron of all those forced to leave their native lands because of war, hatred, persecution and poverty.” As the guardian of Jesus and Mary, Joseph cannot “be other than the guardian of the Church,” of her motherhood, and of the Body of Christ. “Consequently, every poor, needy, suffering or dying person, every stranger, every prisoner, every infirm person is ‘the child’ whom Joseph continues to protect.” From St Joseph, writes Pope Francis, “we must learn… to love the Church and the poor” (5).

St Joseph also teaches us “the value, the dignity and the joy of what it means to eat bread that is the fruit of one’s own labour.” This aspect of Joseph’s character provides Pope Francis the opportunity to launch an appeal in favour of work, which has become “a burning social issue” even in countries with a certain level of well-being. “there is a renewed need to appreciate the importance of dignified work, of which Saint Joseph is an exemplary patron,” the Pope writes.

Work, he says, “is a means of participating in the work of salvation, an opportunity to hasten the coming of the Kingdom, to develop our talents and abilities, and to put them at the service of society and fraternal communion.” Those who work, he explains, “are cooperating with God himself, and in some way become creators of the world around us.”

“Fathers are not born, but made,” says Pope Francis. “A man does not become a father simply by bringing a child into the world, but by taking up the responsibility to care for that child.” Unfortunately, in today’s society, children “often seem orphans, lacking fathers” who are able to introduce them “to life and reality.” Children, the Pope says, need fathers who will not try to dominate them, but instead raise them to be “capable of deciding for themselves, enjoying freedom and exploring new possibilities.”

‘The aim of this Apostolic Letter is to increase our love for this great saint, to encourage us to implore his intercession and to imitate his virtues and his zeal’.

This special year dedicated to St. Joseph (8th December 2020 until 8th December 2021) coincides with the 150th anniversary of his declaration as Patron of the Catholic Church, hailing him as a model of fatherhood and a key intercessor in modern times.

It will be possible to obtain a plenary indulgence in relation to the Year of St. Joseph, under the usual conditions of going to confession, receiving the Eucharist, and praying for the intentions of the pope.

According to the document, a plenary indulgence will be available under these conditions:

At the conclusion of his Letter, Pope Francis adds another prayer to St Joseph, which he encourages all of us to pray together:

Hail, Guardian of the Redeemer,
Spouse of the Blessed Virgin Mary.
To you God entrusted his only Son;
in you Mary placed her trust;
with you Christ became man.

Blessed Joseph, to us too,
show yourself a father
and guide us in the path of life.
Obtain for us grace, mercy, and courage,
and defend us from every evil.

You can also explore the following links from Vatican News which have informed the content of this article: