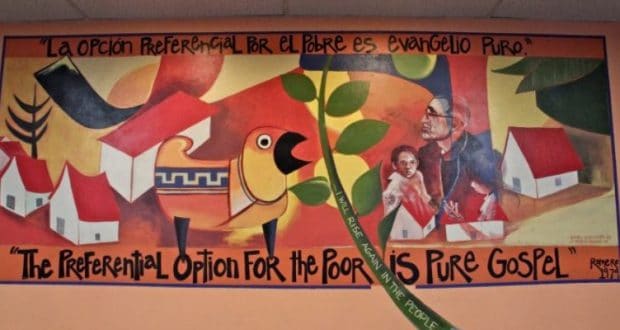 Today, 24th March is the 40th anniversary of the assassination of  Oscar A. Romero, Archbishop of San Salvador, El Salvador.  He  was assassinated on March 24, 1980, while celebrating Mass in a small chapel in a cancer hospital where he lived. This prayer was composed by Bishop Ken Untener (1937-2004), drafted for a homily by Cardinal John Dearden in 1979 for a celebration of departed priests. The mystery is that the words of this prayer are attributed to Oscar Romero, but they were never spoken by him.

A Future Not Our Own

It helps now and then to step back and take a long view.
The Kingdom is not only beyond our efforts,
it is beyond our vision.

We accomplish in our lifetime only a fraction
of the magnificent enterprise that is God’s work.
Nothing we do is complete, which is another way of
saying that the kingdom always lies beyond us.

No statement says all that could be said.
No prayer fully expresses our faith.
No confession brings perfection,
no pastoral visit brings wholeness.

No program accomplishes the Church’s mission.
No set of goals and objectives include everything .

This is what we are about.
We plant the seeds that one day will grow.
We water the seeds already planted
knowing that they hold future promise.
We lay foundations that will need further development.
We provide yeast that produces effects
far beyond our capabilities.

We cannot do everything, and there is a sense of
liberation in realising this.
This enables us to do some thing, and to do it very well.

It may be incomplete, but it is a beginning,
a step along the way, an opportunity for the Lord’s
grace to enter and do the rest.

We may never see the end results,
but that is the difference between the master builder and the worker.
We are workers, not master builders,
ministers, not messiahs.

We are prophets of a future not our own.

Archbishop was recognised as “a martyr for the faith”, he was beatified on 23 May 2015 in San Salvador.

On 14 October 2018, in St Peter’s Square, Pope Francis proclaimed Oscar Arnulfo Romero a saint. For the occasion, the Pope chose to wear the same blood-stained belt that Romero was wearing at the altar when he died.

“Aspire not to have more, but to be more.” – Saint Oscar Romero

St. Oscar Romero – Pray for Us.