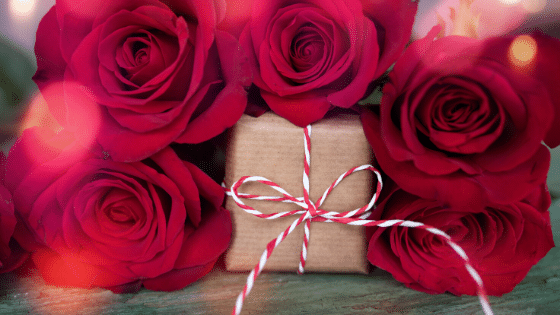 Valentine was a priest who died during a persecution of Christians under the Emperor Claudius the Goth. Legend has it that the Emperor was worried by a reluctance of young Roman men to join the army to fight his campaigns, a reluctance he put down to their attachment to their wives and families, or fianceés, so he came up with the bright idea of banning marriages and engagements in Rome.

However, Valentine continued to marry couples despite the ban until he was arrested and condemned to be beaten with clubs and beheaded on the Flaminian Way at Rome, and the Flaminian Gate, now the Porta del Populo, was later known as the Gate of St Valentine.

The other legend about Valentine tells that a prison officer brought his daughter, Julia, who had been blind since birth to Valentine who must have had a name for medicine or healing. He treated her with ointment and her father asked him to give her lessons. The day before his execution, he wrote a note for Julia and when she opened it she was able to see and he had put a yellow crocus in it for her.

It has been suggested that this note was the origin of the tradition of sending notes and gifts on St Valentine’s Day. The 14th February (St. Valentine’s Day) has become the day for declaring love. In the Middle Ages this was linked to the belief that it was on this day that birds chose their mates.

How did Valentine arrive in Dublin?

Throughout the centuries since the martyrdom of St. Valentine there have been various basilicas, churches and monasteries built over the site of his grave. Therefore, over the years, many restorations and reconstructions took place at the site.  In the early 1800’s, such work was taking place and the remains of Valentine were discovered along with a small vessel tinged with his blood and some other artefacts.

In 1835 an Irish Carmelite by the name of John Spratt was visiting Rome. Apparently his fame as a preacher had gone before him. The elite of Rome flocked to hear him and he received many tokens of esteem from the doyens of the Church. One such token came from Pope Gregory XVI (1831-1846) and this was the remains of Saint Valentine.

On November 10, 1836, the Reliquary containing the remains arrived in Dublin and was brought in solemn procession to Whitefriar Street Church where they were received by Archbishop Murray of Dublin. With the death of Fr Spratt interest in the relics died away and they went into storage. During a major renovation of the church in the 1950s/60s they were returned to prominence with an altar and shrine being constructed to house them and enable them to be venerated. The statue was carved by Irene Broe and depicts the saint in the red vestments of a martyr and holding a crocus in his hand.

Today, the Shrine is visited throughout the year by couples who come to pray to Valentine and to ask him to watch over them in their lives together. 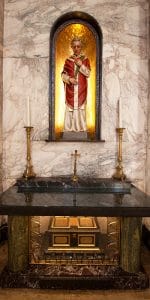 Image: Statue of St. Valentine at the shrine in Whitefriar Street Church, Dublin (courtesy of their website).

Saint Valentine,
true servant who shed his blood
in defence of the sacraments and faith in Jesus Christ,
intercede for us today, we pray.

Gain for us the strength to be steadfast like you
in witnessing to the true faith to the end of our days,
and help us never to lose hope in the Lord
who is always near us.

Intercede for those men and women who are preparing for marriage:
help them to know one another and the true meaning
of the sacramental bond they are preparing to enter.

Intercede for those who are joined together
in the sacrament of marriage,
that they may never give up when trials come their way
but may remain faithful to each other,
and to the Lord who blessed their union.

© Copyright 2022 - Presentation Sisters Union North East Ireland - All rights reserved | Website by Digital Training Institute
16 Shares
Share16
Tweet
We use cookies to ensure that we give you the best experience on our website. By your continued use of this site you accept such use.ACCEPTREAD MORE