Story of The Icon 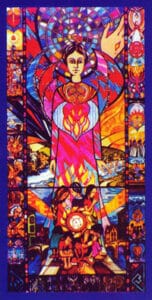 To mark the bi-centenary of the death of Nano Nagle in 1984, artist Desmond Kyne was commissioned by the Presentation Congregation to create an icon as a fitting memento of her life.

The artist drew on the medium of kinetic stained glass to create an icon which evokes an inspirational story of faith, courage and heroic leadership of a singular, purposeful woman, whose entire life was focussed on God and God’s people.  Her passion and commitment for the Gospel glows through each detail of the work and reflects the spirituality that fired Nano’s life and mission.

In the icon the image of the Sacred Heart is emblazoned like a jewel on Nano’s gown, with the symbol of the Cross.  Devotion to the Sacred Heart was popular in Nano’s day, and was central to her spirituality.  Her great enterprise had been firmly rooted and held in love that was both human and divine, so that she became a living icon of the compassionate heat of Jesus to the hungry and poor of Cork.

The centrality of her prayer emanates from the icon.  Over a lifetime, God had painted His portrait in her.  The Incarnate Love of the Gospel Jesus, daily contemplated propelled her to his service.

Nano contemplated in stillness the fact that in Jesus the Word had become flesh and embraced our human condition.  He was vulnerable, wounded, rejected, and paid the ultimate price of self-donating love.  Once Nano was awakened to this mystery of Incarnation, she moved to act with the self-same justice, to love the needy tenderly, and to walk humbly among them. One imagines her before the tabernacle, leaning into the heart of Christ as she whispers, “What should I do? How do you wish me to paly my part in the healing  of this corner of the fractured broken world?”

Caught by the passionate love of Jesus she, and subsequently her companions were drawn to move from  ‘the temple of riches to the tables of the poor’.

In the middle panel of the icon the Lamb of God is at the centre of a small group of poor children: innocence and love are partners in suffering.

The icon presents Nano gazing outward onto the world.  Her right hand rests in stillness and quiet, while the left hints at movement towards action.  It suggests a woman who holds as important the need to reflect  and discern the insights birthed in her as she prays.  She brought her life into her prayer – the encounters, the struggles, the difficulties she experienced. She sought the guiding hand of the good Spirit to enable her to make radical choices, confident that God was with her.

The wellspring of her ministry flowed out form her deep awareness of God at work in her life.  Her response to him had but one desire, to give him honour and glory. In a letter to Teresa Mulally in 1779 she wrote, “I hope that the Almighty will direct you to what is most to his honour and glory”.

In the icon the love and support of the Father is revealed in Nano through  the image of the arm of Christ, which envelops her in a protective and comforting way.  His pierced hand indicates that he is familiar with suffering.  She too will experience in her life that the dynamic of the cross is a core part of discipleship.  Nano Nagle experienced at first hand the ‘wood of the cross’ in her own life and ministry.

Nano Nagle was an authentic woman, who lived the mysticism of service. ‘Her feet bore the sores of a pilgrim on a journey with a cold shivering humanity and that is where she walked into Christ., and together, step by struggling footstep they forged a new path into new life”.

(The text represented here is an extract from Chapter 7: pages 44-49 – in The Story of Nano Nagle – A Life Lived on The Razor’s Edge’, by Anne Lyons, pbvm (Messenger Publications).  See 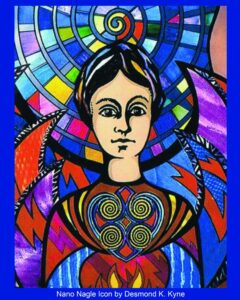 It is now more than 250 years since Nano Nagle walked the streets of Cork. Her influence through the Presentation Sisters in these two centuries has stretched far beyond any limits she herself could have imagined. This icon presents, with all the power of symbols and colour, what mere words can only do inadequately.

The artist, Desmond Kyne, has chosen a youthful image of Nano Nagle to occupy the centre panel, which is alive with colour. Nano stands in calm majesty, and suggests both patience and endurance. In the centre of the icon is the image of the Sacred Heart, treated here in an imaginative and probably unfamiliar way. The Sacred Heart was Nano Nagle’s central devotion.

At Nano’s feet is a group of children. Buildings symbolizing the city of Cork are to either side with the Southgate Bridge on the left and the Northgate Bridge on the right. These areas were the centre of Nano Nagle’s apostolate toward children, many of them abused and exploited. The side panels of the icon elaborate some of the events and symbols of Nano Nagle’s life. These include:

Framed copies of the Nano Nagle icon, created with the kinetic stained technique, hang in many of the Presentation Sisters Convents worldwide.

The original life-size icon can be found at the Nano Nagle Centre, Ballygriffin, County Cork, Ireland.

The artist himself writes:

“It is entirely appropriate, and in the best traditions of the early church in Ireland, that Nano Nagle should be honored by icon and by symbol. No people in Europe better understood or expressed the life-giving, truth-revealing power of symbolism than did our forefathers. The Nano Nagle icon follows closely the story-telling tradition and invitation to discover the mystery of God.”

About the Artist and Iconographer, Desmond Kyne