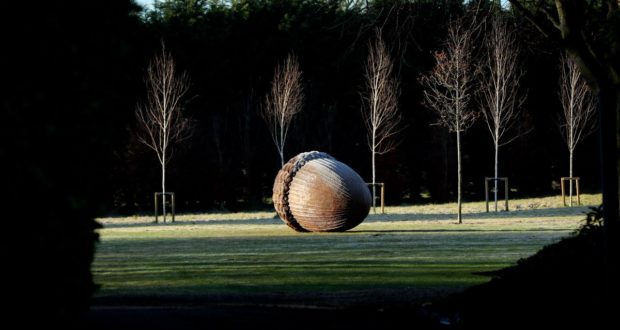 Image courtesy of @PresidentIRL - The People's Acorn in the grounds of Áras an Uachtaráin.

In December 2016, President Michael D. Higgins announced that sculptor Rachel Joynt had won the prestigious competition to create a 1916 themed sculpture for Áras an Uachtaráin. The winning design, was\entitled ‘Dearcán na nDaoine / People’s Acorn’ and used the symbolism of an acorn’s journey from small seed to majestic oak, to commemorate the past events of the 1916 Rising and celebrate the potential of Ireland’s future.

The finished piece is an extremely beautiful bronze giant acorn based on the idea that the seed carries the genetic stamp of its creator (the Oak Tree) while at the same time a seed also provides protection for the future.

Based on the idea that a seed is its own ‘time capsule’ this bronze sculpture carries within it the writings and ‘sharings’ of some of Ireland’s citizens (from 4-94 years of age).  They had engaged in workshops around the country facilitated by the sculptor Rachel Joynt and the poet Enda Wyley who travelled around Ireland.

This acorn is made in bronze with lots of pencils to form and support the frame.  These are not new pencils but rather, those used and donated. So they are truly the ‘people’s pencils’.

It is at once a simple and profound piece that looks to the future with hope, nestled and at home in the established oak forest at Áras an Uachtaráin.

For further information on this public art project and the production process see some special videos in this link, and also the summary one near the end HERE

From Acorn to Oak

Acorns are nuts that form on mature oak trees. The older the tree, the greater the number of acorns produced.  The Oak Tree is strong yet grows from such a small seed. It too has become a symbol of Presentation … representing the unique planting and then the strong growth and expanse.

The story of the Presentation Sisters has often been described as “from acorn to oak” – a small seed growing into a large leafy tree, whose leaves provide shade and shelter and in time, bear fruit. It has been a Presentation tradition to plant a seed at the start of a new foundation.

Also, for Nano Nagle the gospel image of the mustard seed was understood both as an image of disproportionate growth, and also one of powerful faith that moved mountains. This informed Nano’s thinking and her actions and was something that she addressed in many of her letters.

See:  From Acorn to Oak