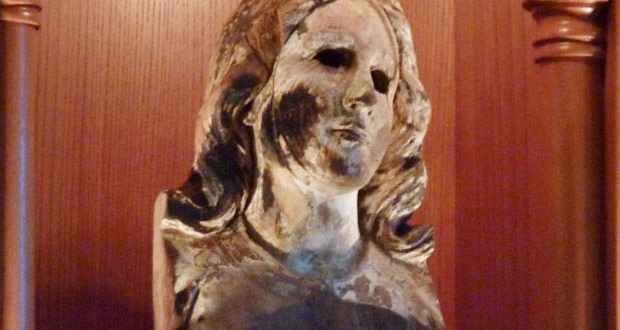 'The Virgin of Nagaski - A symbol of peace'.

The Virgin of Nagaski 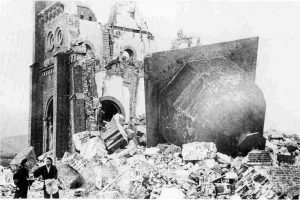 Nagaski Cathedral after the atomic bombing in August 1945

On the 24th November the image used at a Papal Mass in Nagasaki had an additional significance: it is a sculpture of Mary that survived the explosion of the atomic bomb in 1945 – The Virgin of Nagaski.

When Pope Francis offers Mass during international trips, an image of the Marian devotion of the country he is visiting is usually placed near the altar.

Originally this image of Mary was part of a wood carving sculpted abroad and given to the cathedral of Urakami in 1920. It was inspired by the painting of the Immaculate Conception by the Spanish painter Bartolomé Esteban Murillo.

On the 9th August 1945, it was at the altar of the former Urakami cathedral (just a few blocks from the epicentre of the explosion of an atomic bomb dropped by American forces during the Second World War).  When the bust was found, the face of the Virgin seemed fatally damaged, with empty eye sockets, and the cheeks and hair charred, and a crack on the left side of the face which, some believers say look now like tears of the Mother of God.

The bomb that destroyed Nagasaki was dropped at 11:01 in the morning. That day Catholics were praying the novena of the Solemnity of the Assumption of Mary, for which a Mass was held. Everyone in the cathedral died, incinerated by temperatures exceeding 7,000 degrees. More than 35,000 people died in the city within hours; thousands more died in the months to follow. The cathedral was left in ruins.

The remnants of the original  sculptured  image (also known as the Virgin of Urakami) the head of a wooden Virgin Mary statue, survived amid the collapsed columns and scorched debris of the Romanesque church flattened on that fateful day, is now placed in the new city’s new cathedral, built in 1959 on the ruins of  the first one.

It has become a symbol of peace and the fight against the use of nuclear weapons.

At the Atomic Bomb Hypocentre Park in Nagasaki, Pope Francis said that peace and international stability are incompatible with any attempt to build on fear of mutual destruction or the threat of total annihilation.

“In a world where millions of children and families live in inhumane conditions, the money that is squandered and the fortunes made through the manufacture, upgrading, maintenance and sale of ever more destructive weapons are an affront crying out to heaven”.

The last event of the Pope’s long day in Japan took place in Hiroshima. There he confirmed that:

A true peace can only be an unarmed peace”, concluded the Pope in Hiroshima. “It is the fruit of justice, development, solidarity, care for our common home and the promotion of the common good, as we have learned from the lessons of history.”

May the abyss of pain endured in Hiroshima and Nagasaki be a continual reminder to us: the pain reflected in the face of the wooden statue of Our Lady that emerged from the ruins of Nagasaki, and which accompanied the celebration of the Mass presided over by Pope Francis, expressing both consolation and caution.

Note: The following information pieces were used to write this News Article – see  The silence of Hiroshima and the cry of the Pope

and  The Marian Image that survived the Nagaski Atomic Bomb

© Copyright 2022 - Presentation Sisters Union North East Ireland - All rights reserved | Website by Digital Training Institute
23 Shares
Share23
Tweet
We use cookies to ensure that we give you the best experience on our website. By your continued use of this site you accept such use.ACCEPTREAD MORE