Featured News
Home / Faith Journey / We are not left alone 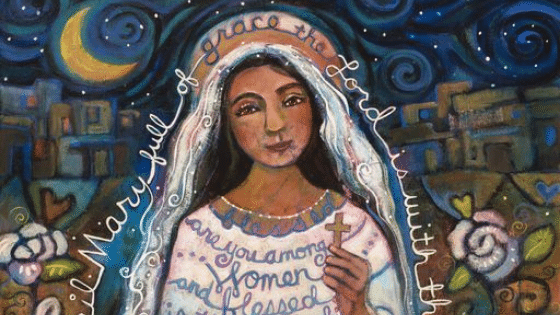 We are not left alone

After the building of the Church of the Holy Sepulchre in 336, the sacred sites there began to be restored and memories of the life of Our Lord began to be celebrated by the people of Jerusalem.

One of the memories about his mother centred around the “Tomb of Mary” (close to Mount Zion) where the early Christian community had lived.  On the hill there was the “Place of Dormition”,  the spot of Mary’s “falling asleep” where she had died. The “Tomb of Mary” was where she was buried.  At this time, the “Memory of Mary” was being celebrated.  Later this became our feast of the Assumption.

The dormition of Mary is a belief (but not a tenet of the Faith) that Mary did not suffer death, as death is a result of original sin.

In 2013 Pope Francis reminded us that Mary “accompanies us, struggles with us, sustains Christians in their fight against the forces of evil”.   That would be enough reason for us to want to celebrate this holy day.  He also said that the Faith we cherish is founded upon not a belief or an event, but a truth:

Our whole faith is based upon this fundamental truth which is not an idea but an event. Even the mystery of Mary’s Assumption body and soul is fully inscribed in the resurrection of Christ.

The Mother’s humanity is “attracted” by the Son in his own passage from death to life. Once and for all, Jesus entered into eternal life with all the humanity he had drawn from Mary; and she, the Mother, who followed him faithfully throughout her life,  followed him with her heart, and entered with him into eternal life which we also call heaven, paradise, the Father’s house.

As we look forward to this holy day, let us meditate upon all the riches we have been given regarding Mary.

Let us turn to her in faith, asking her to intercede for us as we continue to recognise Christ in all we do.  Mary will certainly aid us in this endeavour.

You bore for me the One who came to bless
And bear for all and make the broken whole.
You heard His call and in your open ‘yes’
You spoke aloud for every living soul.
Oh gracious Lady, child of your own child,
Whose mother-love still calls the child in me,
Call me again, for I am lost, and wild
Waves surround me now. On this dark sea
Shine as a star and call me to the shore.
Open the door that all my sins would close
And hold me in your garden. Let me share
The prayer that folds the petals of the Rose.
Enfold me too in Love’s last mystery
And bring me to the One you bore for me. 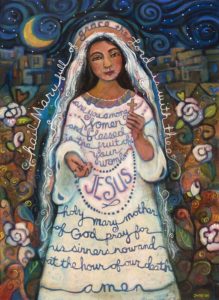 About the Image: Entitled  ‘Hail Mary’, it is by the artist Jen Norton and was inspired by the beauty, wisdom and grace of Mary, the mother of God. It features the words to the prayer woven throughout the body of this young mother.

© Copyright 2022 - Presentation Sisters Union North East Ireland - All rights reserved | Website by Digital Training Institute
15 Shares
Share15
Tweet
We use cookies to ensure that we give you the best experience on our website. By your continued use of this site you accept such use.ACCEPTREAD MORE