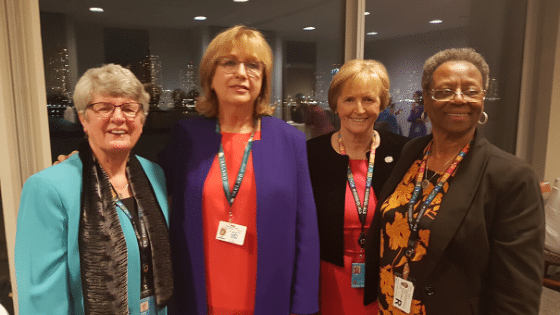 UNANIMA International were also actively present at #CSocD58, presenting their research which showed  that women and children/girls, globally, are vulnerable to the personal and familial circumstances, and structural/systemic causes of Family Homelessness.  As they said: “These are just two of the faces we will be advocating for!”

This summit and its panel discussions provided a way  to educate and influence policy makers at the global level and work for systemic change to achieve a more just world. 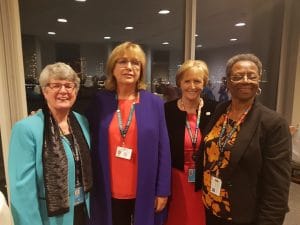 On Wednesday 12th February former President of Ireland, Mary McAleese received the UNANIMA International Woman of Courage Award at the United Nations in New York from Jean Quinn, DW – Executive Director of UNANIMA International.  In her keynote address at the UN Commission for Social Development in New York, Mrs McAleese said “in the month before the national election held last week, for the first time, the homelessness figures showed a slight drop”.

Former president Mary McAleese told the UN conference that “it is hard to credit” that homelessness in Ireland grew by 150 per cent in the four year period that followed a 2013 pledge by the then government to resolve the problem”.  However, she said “it would be a brave person who would claim as in 2013, that we are now on top of the situation and can look forward soon to an end to homelessness”.

Mrs McAleese said she took heart from the fact that during the election campaign “successive opinion polls showed that the public sees the provision of affordable and adequate housing along with the ending of homelessness as top priorities for government action”.

© Copyright 2022 - Presentation Sisters Union North East Ireland - All rights reserved | Website by Digital Training Institute
81 Shares
Share81
Tweet
We use cookies to ensure that we give you the best experience on our website. By your continued use of this site you accept such use.ACCEPTREAD MORE